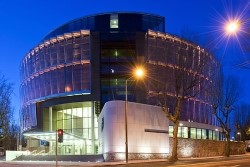 iCom Technologies, in partnership with RWL Advanced Solutions, have recently completed a Brand-Rex Cat6Plus system comprising in excess of 4000 outlets with a fully redundant fibre optic backbone for the Criminal Courts in Dublin. The Complex was delivered by way of a Public Private Partnership with Babcock and Brown. The consortium's design, delivery and ongoing management of this complex equates to a 28 year relationship with The Courts Service. The Dublin Criminal Courts Complex encompasses over 25,000 sq foot. Work on the project commenced in 2007 and the project was completed within 34 months.

The Criminal Courts Complex is the largest courts project undertaken in the State since the building of the Four Courts itself. The 10 storey high building contains 22 double height courtrooms, 16 of which are jury courts. The building is an example of sustainable design. Its unique environmental bronze and glass veil will at once demonstrate the weight of justice, its strength & materiality while simultaneously controlling light and acoustics within the courtrooms. The ‘Great Hall’ is the central heart of the complex, providing a simple legibility to public circulation.

Over the past number of years a major need has emerged for a dedicated Criminal Courts Complex for Dublin. The criminal courts across the city centre and the Four Courts complex have struggled to cope with the levels of business presenting itself. This project provides The Courts Service with a centralised facility to cater for all criminal court business in Dublin. It allows The Courts Service to bring to the nation’s capital the modern and world class facilities which The Courts Service have provided in County towns around Ireland. 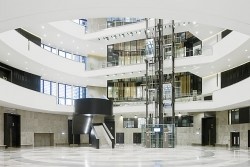 In 2005, iCom Technologies were asked to join the consortium for the design and build of the new Criminal Courts Complex in Dublin (Now called the Criminal Courts of Justice). iCom Technologies was responsible for the entire design and installation of the complete structured cabling system, location and size of all communications rooms and equipment rooms, backbone infrastructure and incoming service providers. RWL and iCom worked very closely on delivering the most effective design in terms of future proofing and redundancy.

A decision was made by iCom Technologies to use Brand-Rex as the network infrastructure component supplier for both Copper and Fibre due to the strict qualification process and stringent delivery of the project. All suppliers had to be formerly accepted by the Courts Authority consultant and Brand-Rex was accepted without hesitation. In addition to the structured cabling installation iCom Technologies were also responsible for the design and installation of the PABX  ( For this system we chose the 3Com VCX VOIP Telephone system ), the TV distribution system ( for this system we chose the Cabletime Compact TV over UTP system ), the Security network hardware ( 3Com network switches ), the Lighting Management network Hardware ( 3Com network switches ).